Such a Voice as That! 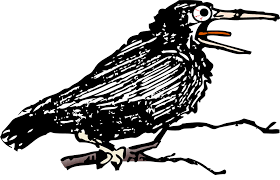 If you’ve ever heard my mom sing, you’d recognize her voice every time she blats out a song. It’s that unique. She brays, she’s loud, off key, flat, out of tune. Even the resonance of the shower stall does not improve her voice, and singing lessons would be about as useful as a water filter in the middle of the Sahara. Mom sings with gusto, like she can’t wait to get the words scraped out of the back of her throat and into the vacuum around her. Yet despite the fact that Mom has an absolutely awful voice, it’s truly a delightful experience to hear her sing because she exudes such joy of music. She beams, she glows, she bubbles with joie de vivre. Everyone who hears her sing smiles, but no one tells her to shut up because it’s fun to listen to someone create triumph out of singing so poorly.

Mom’s voice is so distinctive that everyone recognizes it. It’s terrible, yes, but distinctive. No one wants to sound like Mom. Except you, Writer, you really do want to sound like Mom. Distinct. You want your reader to grab your book and declare, OMG, it’s another exciting, wonderful book from Storyteller, the writer whose voice sounds like no other! Can’t wait to get my hands on it.

So exactly what is this business of writing voice? You know about the other aspects of writing: plot, conflict, character development, pro- and antagonist, setting, time period, and imperfect heroes. You’ve got down grammar, spelling, sentence construction, dialogue, cliff hangers, and secondary plots. But voice – how do you define writing voice? It’s often linked to dialogue, though as unique as speech may be, Southern drawl, Hawaiian pidgin, or Yiddish inflection, it’s more than the slant of a character’s words. Voice shows up consistently, even without dialogue to drive it forward. It’s what happens when the way the words are slung together engages the reader as much as the suspense or mystery that imbues the story. The author owns voice.

John Kennedy Toole’s posthumously published comedy, A Confederacy of Dunces, exhibits a voice like no other. The story is told mostly through the character of Ignatius J. Reilly, a rotund ne’er do well who lives with his mother in a rundown neighborhood of New Orleans. Read the opening paragraph of the story:

A green hunting cap squeezed the top of the fleshy balloon of a head. The green earflaps, full of large ears and uncut hair and the fine bristles that grew in the ears themselves, stuck out on either side like turn signals indicating two directions at once. Full, pursed lips protruded beneath the bushy black moustache and, at their corners, sank into little folds filled with disapproval and potato chip crumbs. In the shadow under the green visor of the cap Ignatius J. Reilly’s supercilious blue and yellow eyes looked down upon the other people waiting under the clock at the D.H. Holmes department store, studying the crowd of people for signs of bad taste in dress. Several of the outfits, Ignatius noticed, were new enough and expensive enough to be properly considered offenses against taste and decency. Possession of anything new or expensive only reflected a person’s lack of theology and geometry; it could even cast doubts upon one’s soul.

Who is this audacious character who exemplifies the worst fashion taste and yet seeks to criticize it in others like someone who doesn’t notice the toilet paper tailing from the back of his pants? It’s Ignatius, and his personality never improves. You might read only that first paragraph today but the author’s voice is so unusual and identifiable that, read another paragraph a hundred pages and two years hence, you’ll still know it: the raucous and farcical humor of A Confederacy of Dunces. It isn’t just the dialect or even the antics of the bumbling inhabitants of this forlorn part of the city. It’s that each character remains true to his internal compass, however skewed the arrows might be. Toole guides the reader through a New Orleans we’d all be loathe to visit in person but we bask in his words as he relates the hijinks of this motley group of social rejects. Readers who savor Dunces are in love with Toole’s original voice.

Voice must feel authentic and true to the story. Juliet and Romeo were doomed from the start, their love too sweet to survive the family feud. Readers sense from Shakespeare’s first line, Two households, both alike in dignity, that no dignified end bodes for the lovers. The Bard mastered voice in everything he wrote and his audience remains loyal.

Stretch voice too far and a story, however clever and inventive, will read as unbelievable. It’s the lack of a sure voice that permits a character to do something counter to his nature. We’ve all thrown down a book as betrayed by a voice that’s wandered too far out of range. Disconnected or fragmented voice is not a new entity to you if you’re a member of a writing critique group or a lower division college class. Stop rolling your eyes – sometimes it’s your own voice singing off key.

Voice has history, and history must be honored. No matter how toothsome he looked in her Grandmother’s bonnet, Little Red Riding Hood’s Big Bad Wolf had to con the girl into settling onto his dinner plate. He was a wolf, after all, and wolves eat children, so the Grimm story goes. Any alteration to the original tale must provide insight into Wolf’s psyche. The reader must believe he has sincerely opted for noodle soup instead of red meat. The writer must show that Wolf was understandable after all, his appetite for chewing up children based on his miserable childhood and the bullies that tried to eat him. All he ever really wanted was a friend willing to chop veggies with him when all he ever got was bigger wolves tenderizing his tail. That could be a credible voice as well, more heartrending than the original fairy tale. Yet it isn’t the change in outcome that showcases voice. It’s the tone and method of story presentation. A consistently distinguished voice can reveal poor abused Wolfie – not the big baddie everyone thought him to be, just a frightened pup in a shaggy costume. Ahwoo-o-o-o.

OMG, you hear that? You’d know that sound anywhere. That’s Mom singing off key. There’s a place for such a voice as that!

The Long and Winding Road