P is for The Poisonwood Bible 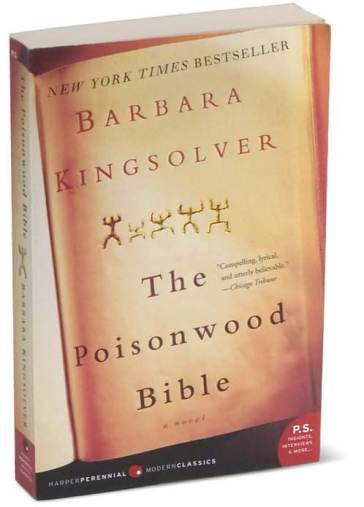 The Poisonwood Bible by Barbara Kingsolver captivated me from the prologue where a mother traipses through an African jungle with her four young daughters.  Orleanna Price, the wife of a zealous Baptist minister from Georgia, knows she is an oddity, a white woman in a Belgian Congo village in 1960. She seems to be speaking from a distant time and place, perhaps from her own grave. Her gimlet eye sees the jungle with its voracious ants and fecund flora, but more, she sees her internal life riven with conflict, acquiescence, and inadequacies that have cost her most dearly.

If Orleanna is quiet and submissive to her husband, it is he, Nathan Price, who is loudest and most obstinate. Intending to convert the native Congo inhabitants, he attempts to convince them of Christianity’s truth by pointing to the Bible and describing it as bangala, a Kilanga word he believes to mean “precious.” But his pronunciation is incorrect, and thus he declares the Bible to be “poisonwood.” It’s just the beginning of everything he gets wrong about Congo, from the language to the people to the customs to how hungry the community is to the coming revolution that will jettison colonialism in the Congo – and will alter his family’s course, one by one. Yet Nathan listens to no one and his obdurate convictions have catastrophic consequences for everyone.

Along with Orleanna, the four daughters tell the stories of their lives in Africa in alternating chapters. Rachel, the oldest at fifteen, the most beautiful and the most materialistic, is also cynical, selfish, and mixes metaphors hilariously. She yearns to be a normal teenager, something not possible in a jungle. Yet as an adult she carves out a unique livelihood managing a deluxe hotel in the French Congo, albeit with a bit of dishonesty, forgoing the luxurious American life she once imagined.

Leah, fourteen, is hard working, a natural leader, and a fearless idealist who most shares her father’s religious passion. She relishes education and especially Anatole, the man who is her teacher and whom she will marry. She is the daughter who becomes part of the fabric of Africa in the most authentic way, by moving with her husband and their four sons to Angola. Invigorated by a vision of a just society, she and Anatole help Angolan citizens reclaim their heritage and their country.

Adah cites her twin Leah’s dominant personality for stealing more than her share in the womb, leaving Adah to be born mute and crippled. Because she does not waste time trying to vocally describe what is happening around her, she is a brilliant observer. Adah returns to the United States, is healed of both her infirmities, and becomes a dedicated physician who studies viruses, an apt occupation for someone influenced by early life in Africa. She is the one who comforts Orleanna in her mother’s old age.

Ruth May at five is the baby, adorable and wise beyond her years. She makes friends with the tribal children, teaching them to play Mother May I, a game that becomes a plaintive elegy toward the end of the book. Ruth May is beloved by everyone in Kilanga, but it is her fate that turns the family inside out, that shows Nathan how much he has failed, and that destroys his mission to Congo.

The story exposes how completely wrong the Western world has been about Africa. From misunderstanding its rich language to its beguiling and sometimes horrific customs to assuming the indigenous people are bereft of intelligence or self-determination. Nathan of course is symbolic of wrong judgments at every turn, yet Kingsolver’s masterful writing prevents him from being a one-dimensional cartoon. However inappropriate his agenda for Congo, he is sincere in his faith and in his quest. We weep with him when he realizes he has failed to baptize his youngest child, but we do not mourn when we learn of his death.

Of my many favorite quotes, I begin with this from Orleanna: Some of us know how we came by our fortune, and some of us don’t, but we wear it all the same. There’s only one question worth asking now: How do we aim to live with it?

From Rachel: I shut my eyes tight, but even so, the tears ran down. I wept for the sins of all who had brought my family to this dread dark shore.

From Leah: Our journey was to be a great enterprise of balance. My father, of course, was bringing the Word of God – which fortunately weighs nothing at all.

From Adah: It is true I do not speak as well as I can think. But that is true of most people, as nearly as I can tell.

From Ruth May: If somebody was hungry, why would they have a big fat belly? I don’t know.

Each of these quotes, all of them early in the book, exposes a significant part of this multi-layered story and also reveals the personalities of the speakers. What moved me the most was how arrogant and assuming Nathan Price was, as well as a few other white people. Though some of the Congolese were confrontational or untrustworthy, as would be some people in any given population, this is their land. The richness of their culture sustains them even in hard times yet Price sees them only as ignorant folks who need agricultural education and Christianity to better their lives. He is unable to understand that what they need is nothing he has to offer, but freedom from a dominating and patronizing European government.

Written in chapters that echo the books of the Bible, each section shows the dissolution of impractical dreams and the creation of work that might truly sustain the inhabitants while respecting their history. The book ends with an epilogue that bookends the story. The mother and her four daughters walk through an African market, recalling the walk through the forest made decades earlier. Everything is changed, of course, everything about their lives and about Africa is different. As Ruth May notes, “Every life is different because you passed this way and touched history. Everyone is complicit.”

It is a long story. My regret is that I came to the end of it and had finally to say good bye to the country, to the Price family, and to the Africans who peopled the land. Do not think I have already told you the whole story. I have told you nothing. Only Barbara Kingsolver can tell you the story of The Poisonwood Bible. Make yourself comfortable, open the book, immerse yourself in its pages. Read.

I look forward to learning about your favorite P fiction books.

Other books that were serious contenders for P:

A Painted House by John Grisham

The Pearl by John Steinbeck

People of the Book by Geraldine Brooks

The Persian Boy by Mary Renault

Pride and Prejudice by Jane Austen

The Prince and the Pauper by Mark Twain

The Prince of Tides by Pat Conroy

The Princess Bride by William Goldman

Out of the Maze