Born in a Treacherous Time 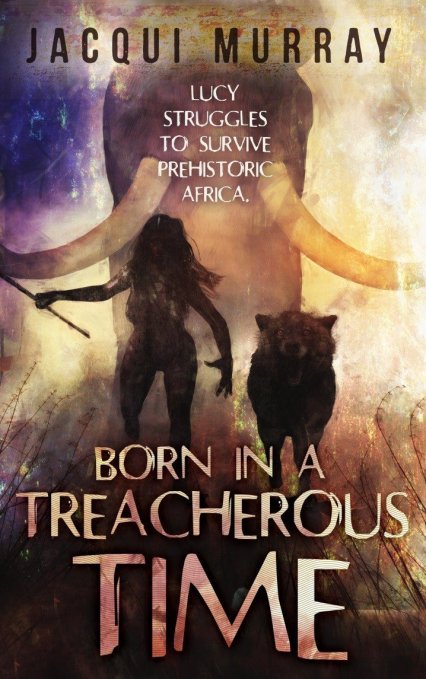 I’ve been looking forward to the publication of  Born in a Treacherous Time by Jacqui Murray. Not just because she’s a good friend but also because I’ve had the privilege of reading part of the book and was captivated by it.

It’s the story of Lucy, a Homo habilis woman who struggles to survive in prehistoric Africa when volcanoes erupted without warning, animals attacked from every region, and waking each morning was not guaranteed. She faces challenges that force her to use her physical prowess as well as her mental skills, sometimes trying to convince the members of her tribe that she has solutions that may protect them.

Murray employs interesting characters living in a challenging time who face obstacles from surviving the daunting environment to grasping moral dilemmas. Her description of this prehistoric era puts the reader into the period when Earth was dangerous and beautiful, the very nebula of human development, and a moment of precipitous change.

I had a chance to talk with Jacqui about her newest book, asking questions she was generous in answering. Following is the interview.

Thank you, Jacqui, for agreeing to take the time to discuss your newest book, Born in a Treacherous Time .What one characteristic would you say allowed Lucy to survive in a world populated with saber-toothed cats, violent volcanoes, and predatory species who liked to eat man?

Really, with our thin skin, dull teeth, and tiny claws (aka fingernails), Lucy had no right to survive against the thick-skinned mammoth or tearing claws of the great cats of that time. But we did. The biggest reason: Even then, Lucy was a problem solver. She faced crises and came up with solutions. Where most animals spent their time eating and sleeping, Lucy had time left over. This, she used to solve problems.

To me, that thoughtful approach to living, one no other animal exhibits, is why we came to rule the planet.

How do you differentiate Lucy (the book’s main character) from the folks who probably led to her species’ extinction?

Homo habilis (Lucy) was a brilliant creature, worthy of our respect and admiration, but probably too kind for the next iteration of man, Homo erectus. Lucy would rather flee than fight, didn’t kill even to eat, and didn’t create offensive weapons. As a result, her first line of defense was flight.

But, in this story, you see evolution at work. Lucy does what she must to survive, even if it ultimately means killing.

We know Lucy’s species, Homo habilis, died out about the time of this story (1.8 million years ago). Is this story dystopian—meaning Lucy loses in the end?

Homo erectus (Lucy’s arch enemy) was a violent species of man. Their skulls were significantly thicker than Homo habilis–a sign that they got beat about the head often and survived. He routinely kills to survive, thinks nothing about that strategy, but I leave it open whether Lucy’s species ‘evolved’ into this more robust species or was replaced by them. We just don’t know.

I have to mention how compelling the book cover is.

Thank you. The artist fulfilled my hopes.

This excerpt is from Kirkus Reviews:

Murray’s lean prose is steeped in the characters’ brutal worldview, which lends a delightful otherness to the narration …The book’s plot is similar in key ways to other works in the genre, particularly Jean M. Auel’s The Clan of the Cave Bear. However, Murray weaves a taut, compelling narrative, building her story on timeless human concerns of survival, acceptance, and fear of the unknown. Even if readers have a general sense of where the plot is going, they’ll still find the specific twists and revelations to be highly entertaining throughout.

A well-executed tale of early man.

I hope this article has excited you to read Jacqui Murray’s Born in a Treacherous Time.

Title: Born in a Treacherous Time