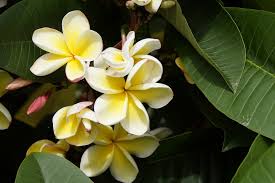 Our family moved from yellow-skied New Jersey in the late 1950s to a Honolulu suburb. My dad planted a small plumeria tree with white and yellow blossoms. It shaded a bathtub-sized pond in the front yard of our Aina Haina house. Five goldfish lived there, darting near the lava rock edges. One was a bug-eyed black molly, the other four were orange or orange with patches of black and white. Paradise isn’t where you find it. It’s where you make it.

If I opened the front door, the fish ignored me, even if I perched on the miniature waterfall to watch them swim. If I opened the sliding door immediately adjacent to the front door, the fish gathered at the surface in the center of the pond. They wriggled their tails and bubbled their enthusiasm. They’d learned to respond to the screech of the slider, and waited for me to feed them. The fish never tired of this trick and I never forgot how to play.

Many years after we moved to California, my parents built their dream house on a hill in the heartland of Orange County. Dad planted a small plumeria stalk in the yard with a view to the Pacific. A view to Hawaii, if you could see that far. I think he could.

Unlawful at the time to bring them to the mainland, he’d smuggled a foot long stalk in his jacket and flew it to California, beloved contraband for his garden. Twenty-five years later, it had grown as big as a school bus, a glorious sovereign of the yard. She graced us with thousands of coral pink blossoms, fragrance to make us drunk, and beauty to shame the roses.

My sons played in the shade of the tree and collected fallen blossoms.  They grew and the tree grew and our family grew and changed, as families do.

The house is long sold, my father long passed. One of my sweetest mementoes is the lei he strung for me of those pink plumeria blossoms, the only lei my dad ever gave me. I wore it for a week until the petals drooped on their string. Now it’s a dried bundle in a ceramic pitcher. If I touch the browned and brittle leaves, they break off in chips. Neither tape nor glue can repair my clumsiness. I’ve learned to look but not touch.

The new owners of the Orange County house cut down the pink plumeria tree. Fools. It couldn’t have possibly interfered with their view of Hawaii. You must have imagination to see that far.

Writing is as much fabrication as memory. This story is true. As for my other stories, you’ll have to guess. I never tire of keeping secrets.