Q is for Queen of the Summer Stars

Queen of the Summer Stars by Persia Woolley is book two of her Guinevere Trilogy, and a story that continued my passion for romantic Arthurian legends. Woolley’s unique take is to present the famous tale from Guinevere’s point of view. The series takes us from the princess as an adventurous youngster in book one, through the years of her romance and marriage to King Arthur and her attraction to Lancelot in book two to her final years in the third book when the legend of Camelot and the Knights of the Round Table have become the stuff of the past.

It all started for me with the 1967 movie Camelot, the musical starring Vanessa Redgrave, Richard Harris, and Franco Nero. I couldn’t get enough of singing (badly) the songs and imagining myself so loved by two men. Of course I was very young then and in love with all handsome men, none of whom were in love with me. The movie was a perfect foil for the alluring alter ego I longed to be. Several years later when my marriage had become nearly impossible*, the books fed my craving to be adored. I was smitten by the adventure and fantasy of a world of magic, power, quests, nation building, and a beautiful woman at the heart of it all. I can’t even remember which book of the list below I read first, but I know I read several out of order.

The essential Arthurian legend concerns Arthur Pendragon who is guided by the magician Merlin to claim his birthright to the High Throne of Britain, a land of warring lesser kings. The beautiful Guinevere becomes his bride and the High Queen but eventually she falls in love with  Lancelot, supposed to be Arthur’s most loyal and noble knight. Thrown into the mix is Arthur’s jealous and evil sister Morgan le Fey and her dour son Morgause, as well as the quest for the Holy Grail. Arthur is determined to establish the strength of the Round Table of fellow leaders to preserve the trembling country and protect it from foreign invaders as the Roman Empire collapses around them. The dream of enduring peace drives Arthur, and Arthur needs Guinevere at his side.

Ideas of faith, passion, sacrifice, fidelity, betrayal, rebellion, determination, schemes, and murder accelerate the action. Guinevere, the symbol of greatest femininity and desire, despairs of ever having the one thing she most yearns for but cannot achieve: a child of her own. Though she is revered by everyone, she also suffers sorrow and self doubt. Every character is majestic but flawed, except for those who are well known to be simply evil and unredeemable.

This second book focuses on the best known parts of the legend, so I was familiar with the characters and the outcome. Woolley describes the complex political intrigue in detail but also lingers over the beauty of the land itself as well as the castles, dwellings, and aspects of daily life in the sixth century. Her fresh and masterful approach kept me eagerly turning pages, and then seeking the other two volumes in the series.

At a time in the world where greed, manipulation, and lies promote agendas to protect the powerful and sublimate the common man, the Arthurian legends speak to noble causes. Though the premise of a perfect world falters at the end because of human foibles, it’s nice to know there are ideals to which we may ascribe. If I had to describe Queen of the Summer Stars in a word I’d say sumptuous. Ah, queens and kings, campaigns and secrets, myths and reality – these books have it all.

Other books based on the Arthurian legends or related ancient Britain topics:

Child of the Northern Spring, and Guinevere:The Legend in Autumn: books one and three of the Guinevere Trilogy by Persia Woolley

The Crystal Cave, The Hollow Hills, The Last Enchantment, The Wicked Day, all by Mary Stewart (I haven’t read The Prince and the Pilgrim, her final book in the series)

The Mists of Avalon by Marion Zimmer Bradley (there are six other books in her series, but I haven’t read them)

The Once and Future King by T.H. White

Sherwood by Parke Godwin (about Robin Hood, but similar in its romantic fantasy tone)

Oddly, I have not read Le Morte D’Arthur by Thomas Malory.

Out of the Maze 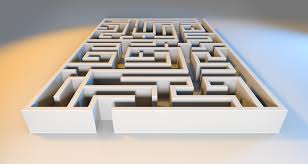 Conventional wisdom states that a book must open with a passage from the most current time period of a story, but that’s not my comfort level. Organizing my story demands structure that doesn’t come naturally to me. My stories tend to ramble around like a steel ball rushing through a wooden maze of a dozen possible pathways until it finds the way out. Characters in my stories move back and forth between assorted phases of their lives, history pokes its professorial pen into the plot, fictional landscapes resonate with the physical appearance of actual mountains. Writing strategies: flashback to early trauma, flash-forward to possible resolution. Story arcs looking for the way out or at least to the end of the book. Many authors tell stories this way, weaving past events with present action, revealing the impact of old baggage, the way things long gone used to be. My problem is I write out of sequence. The charge is to put it together so a stranger reading late at night can follow the story without getting trapped in the maze.

I write in fits and spurts, pantsing as some call it. Parts of the story get written out of order, and if you ever visit my home you’ll see how that distractable method is reflected in the way I live. A dozen incomplete projects lie scattered around the room: a watercolor intended for my youngest grandchildren (drawn but not painted,) a basket of laundry ready for folding if it was actually washed yesterday (needs the sniff test first,) a partially eaten yogurt on the computer desk (probably best to toss the remainder.) It seems obvious to draw, then paint. To wash, then fold. To eat top down into the cup, then lick out the bottom. (OK, so you don’t lick.) The beginning actions of mundane tasks present themselves in obvious order.

I’ve never had any trouble starting a story. It’s knowing how to begin it that’s the problem. Writing, however, doesn’t begin at one obvious moment in time and location because life doesn’t either. Well, maybe the egg and sperm routine, but that’s not what I mean. You can detect my rambling choreography in this post. It presents a problem when I write – where to begin. I originally began my first novel in a shtetl in Poland more than one hundred years ago, but the story is about the journey of a contemporary American woman. Writing 101 says to begin with the American woman, so eventually I tossed what had been a flashback masquerading as an opening scene to make its appearance later in the book. The story is stronger now. It still conveys a world grievously lost but has a direct appeal to contemporary audiences.

My third adult book took shape as an outline, a practice I’d disdained all through college. (I was more likely to fake an outline after the finished project – bad student.) Yet the outline format helped keep me on track with the progression of the story. There are still many scenes that recall past situations and some that suggest future events, but the flow is contained by the underlying structure to which I remained true. Characters consider past moments as they impact the current situation, a natural evolution of lives defined by story. A teenage boy recalls the girlfriend he thought loved him. A middle aged man remembers the woman he used to love. A woman yearns for the mother who once loved her. A pastor reminds everyone of what might yet be. A collection of past relationships and future possibilities construct the singular day of the story.

Much as I’m endeared to pantsing, (such fun to write, as if a story is a series of moments tumbling down steps, events landing where they may,) I might resort to an outline for future books.  They will always include portions of earlier incidents and later repercussions. That’s the way life is – one haphazard decision resulting in a terrible outcome, and hopefully one eureka moment leading to a glorious conclusion. The way to begin a story, whether pantsing or outlining, is to drop the steel ball into the maze and then tip the wooden box every which way.

Next, write. And then, rewrite.