N is for Night in Shanghai 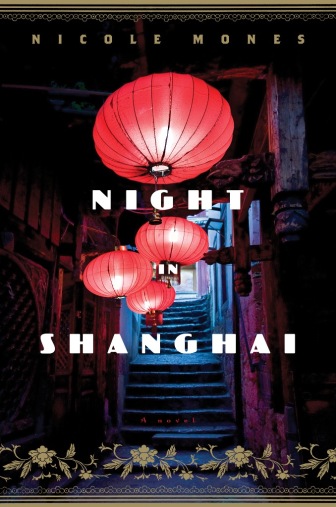 Night in Shanghai by Nicole Mones is historical fiction based on 1930’s Shanghai, the period in Chinese history where it is shackled by the corruption of controlling gangs to the period where it is invaded by the Japanese during World War II, finally reclaimed by Chinese leadership, only to be shackled again, now by the unforgiving ideology of communism. Against this backdrop two people of differing backgrounds fall in love. It is, like all great affairs, an unlikely attraction of doomed passion, but it is also the stuff of love, lust, longing, and legend.

Song Yuhua is the beautiful, intelligent, and well educated translator for Du, the Chinese crime boss who runs the city’s successful nightlife, at a time when everyone comes to nightclubs to play, sing, and dance, especially to the sensation known as jazz. The subservient role of women in China is well documented, and it didn’t surprise me to learn that Song was given in bondage to Du in order to cover her father’s gambling debts. She navigates a violent Shanghai underworld where loyalty to the kingpin rewards her with comfort and admiration but retribution for betrayal may cost her life.

Thomas Greene is a young African-American man. He has been trained to play classical piano, a skill ignored in the United States where his talent carries no value because of his race. Music informs his life completely yet segregation in Baltimore offers him nothing. Impoverished and despondent, he’s offered a job to play with a band in China. Thomas accepts, escaping the squalor and inequality that is the standard of Black life in 1930’s America. China offers him freedom and a luxurious life with a home, servants, and clothes inaccessible to him in America. He doesn’t let on to his new boss that he has no idea how to play jazz, but the other band members quickly discover his ineptitude.

These two young people of extraordinary talent suffer with their own histories of subjugation, one owned by a man as is custom in her country, the other finding more freedom in his adopted country than he will ever enjoy in the land where he was born. Enraged by the duplicity of her bondage, Song hides the fact that she is spying on her kingpin boss for the emerging Communist rebels living in northern caves. Thomas struggles to understand the intuitive improvisation required of jazz, finally achieving a level of skill admired by the rest of his band and loved by the club attendees.

Seeing each other across the floor of the dance hall, it is no surprise that they are drawn together. Still, their relationship remains unconsummated while their romance grows, until one night when it is obvious that the Japanese are at the threshold of Shanghai, the invasion only moments away. At such fever pitch, Song and Thomas finally find solace in each other’s arms. As any couple would ponder, they are in doubt if their love affair will survive the destruction of the country. Will it ever be safe for either of them? The tension adds gravitas to their dilemma about where they owe their most allegiance – to their cultures or to themselves.

A secondary plotline addresses one of Thomas’ friends, a Jewish violinist with whom he can share his affection for classical music. In  addition, the book presents the efforts of a Chinese diplomat to offer sanctuary to 100,000 Jews trying to flee Nazi Germany to a district in northern China. That this event really happened points up the cosmopolitan and influential persona of the city. On the verge of war from one front and revolution from another, the plan never comes to fruition; it becomes one more failure to save Jewish lives, nevertheless initiated with sincerity.

History books, often brilliantly written and researched, give the timelines, maps, treaties, names of actual players, and outcomes of an era. But historical fiction provides the heartbeat. Mones weaves complex history with dexterity, the result of masterful writing and a vision of individuals snagged in conflicts, both personal and political. Brought to an intimate scale, readers feel the upheaval of China through the eyes of her characters. Throughout the book reigns a sense of Shanghai taking a last, desperate breath before dying as a colonial larva and emerging as a communist moth. We all know of the millions of people whose lives were cast aside like empty pupa along the path to a new Chinese nationhood. Night in Shanghai left me longing for justice – and love.

I look forward to learning about your favorite N fiction books.

Other books that were serious contenders for N:

The Nightingale by Kristin Hannah

The Notebook by Nicholas Sparks

Number the Stars by Lois Lowry